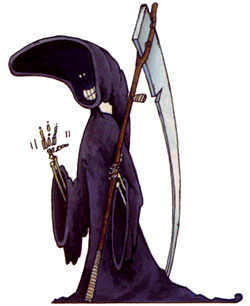 If you’ve ever been to an ex-Soviet country, you’ve probably seen a Lada.  It’s a Russian-made automobile that was extremely popular near the end of the Cold War.  They are still popular.  I know this because in Moldova, they are EVERYWHERE.

You know what else you’ve noticed if you’ve ever been to an ex-Soviet country?  You’ve noticed that all the cars have digital gas pedals.  What do I mean by that?  I mean there are only 2 speeds:  Stopped and Full-Throttle.

That being the case, there’s a saying that I learned:  “Death Drives a Lada.”  Anytime you cross the street, you need to make sure that Death isn’t coming for you.

If he is, he’s driving one of these: