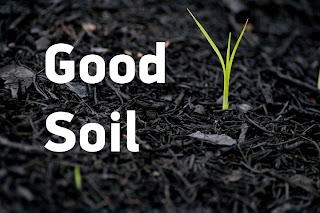 Mark 4:13-23 ESV – And he said to them, “Do you not understand this parable? How then will you understand all the parables? The sower sows the word. And these are the ones along the path, where the word is sown: when they hear, Satan immediately comes and takes away the word that is sown in them. And these are the ones sown on rocky ground: the ones who, when they hear the word, immediately receive it with joy. And they have no root in themselves, but endure for a while; then, when tribulation or persecution arises on account of the word, immediately they fall away. And others are the ones sown among thorns. They are those who hear the word, but the cares of the world and the deceitfulness of riches and the desires for other things enter in and choke the word, and it proves unfruitful. But those that were sown on the good soil are the ones who hear the word and accept it and bear fruit, thirtyfold and sixtyfold and a hundredfold.” And he said to them, “Is a lamp brought in to be put under a basket, or under a bed, and not on a stand? For nothing is hidden except to be made manifest; nor is anything secret except to come to light. If anyone has ears to hear, let him hear.“

“…How then will you understand all the parables?”  Jesus implies that this is an easy one to understand, and then He lays it out simply: The seed is the Word, and the soils are the types of people.  There are 4 basic types of people that receive the message:
There are certainly a lot of sermons and commentaries about this parable, and I’m not going to elaborate on it here.  Instead, I like how Jesus ends this – nothing is hidden except to be made manifest.  He’s saying that everything will eventually be revealed.
If you don’t believe it now, at some point it will become to clear to everyone.  Either people will hear and understand now, or they will understand at the Last Judgement.  It’s our job to hear and believe, to not be choked out by the world, and to bear fruit.
What kind of soil are you?
Are you helping people to hear and understand now, or waiting for them to find out later?
Posted in Wednesday Word