So, I’m sitting in JFK Airport in NY on my way home.  There are so many thoughts about the trip, it is hard to describe.  Right now, I’m sleep deprived and missing my family, so basically I’m primed for writing the best blog posts

Camping was a blast.  I actually got some pictures, so let me share some with ya: 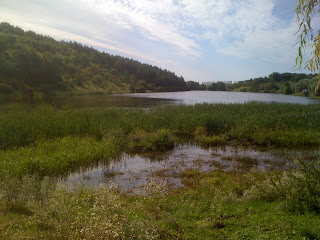 This is the lake/marsh that we camped near.  It was very pleasant.  The only nuisance was the mosquitos, but other than that, it was a great spot to camp! 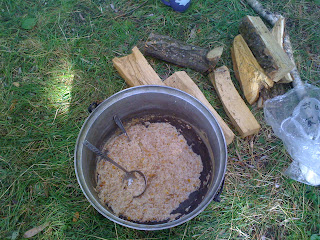 Here’s the big vat of oatmeal we made for breakfast.  In Moldova, they call all hot cereal “kasha.”  It could be oatmeal, cream of wheat, buckwheat, or even rice.  It basically means “hot breakfast mush” and it’s not bad at all

For dinner, we busted out with shashlik, which is like shishkabob, only better! 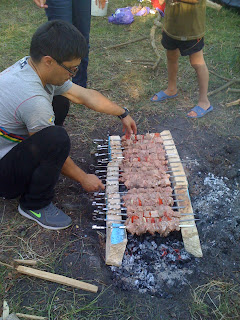 Here’s a picture of the feast we enjoyed: 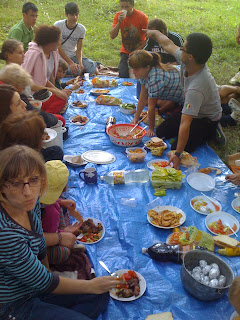 After dinner, we had communion before driving back to Chisinau: 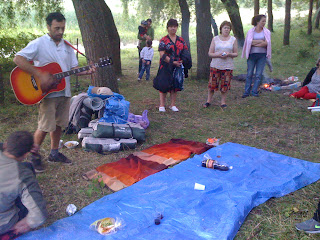 Sunday morning, Steven taught at a church in Chisinau that had about 50 people.  It was an awesome experience.  We did worship in Romanian (which I’ve learned you call “Moldavian” when you’re in Moldova, even though it’s the same language) and Steven taught in Russian.  Luckily, I had a translator, because I still only speak English!
Monday morning, we got up, and Steven and Teresa had to go to the Moldovan State Department to get their Visas, and we were praising God because they got 4 and 5 year visas!  Totally awesome.  Unfortunately, the process took too long (when does any government work quickly?), so Steven got me a cab to the airport.  Since I left the 5 bins of our belongings with Steven and Teresa, I only have a carry-on, so it’s been relatively simple.  I have one leg left, and then home.  I can’t wait!
In summary, it’s hard to put a label on this trip.  Was it successful?  Yes, even though there wasn’t a very definite purpose that I could measure.  We got Steven and Teresa moved into their new apartment, I met some people that I will certainly be ministering to/with in the coming years.  I got more lay of the land, and have an idea of what living in the “big city” will be like.  All that said, I know more clearly that it will be a difficult transition for me and my family.
Every time something “bad” happened, Teresa asked me, “This didn’t change your mind, did it?”  Which I always replied “no.”  Our tickets are purchased already.  They are one-way.  My mind is made, and I’m resolute.  There is a legendary quote from Sir Ernest Shackleton, when he was recruiting men to go with him to explore Antarctica in the early 20th Century:

I look at church planting in Moldova in somewhat the same way.  Although it’s not near as hazardous as sailing to the South Pole, it will be difficult for me and my family.  Why are we going?  Because the call of God for us to do this is “irrevocable.”

Most of all, this trip showed me God’s provision.  Despite the poverty and corruption, He is still sovereign, and He still provides for His kids.  From getting all my luggage into country safely to providing a truck and workers for moving, God provided.  He gave us rest while camping, strength while lifting furniture, and peace during travels.

He is a good God, and we are going to Moldova to serve Him.